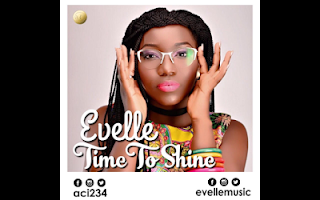 “Time to Shine” is the latest single by the talented and versatile female vocalist / songwriter known as Evelle. The singer, whose full name is Zibili Evelyn Ibhade was the winner of Etisalat Nigerian Idol Season 4 back in 2014. Two years on and fully matured into a young woman, “Time to Shine” is a song that resonates deeply with Evelle portraying her current state of mind – developed wings and ready to fly!A powerful single, it cuts through culture, religion, gender or race resonating with those that continuously make sacrifices to get to where they want to be and finally reach that moment of truth where it’s their “Time to Shine”. Shot by Award winning music director Unlimited LA this message is carefully depicted in the video which shows a focused young lady coming into her own!Not new to the music industry Evelle’s first hit single was titled “I am Naughty” whilst her first official single with her new label ACI Records titled “Waiting” featured Mastercraft and DJ Exclusive and still receives heavy rotation on the airwaves ever since its 2015 release.Born into an environment where entertainment was the norm with her father a singer and a mother who loved to dance, it came as no surprise that singing from the tender age of five years old in a children choir, she would be destined for the stage and stardom.Experience “Time to Shine” now on all major visual and audio platforms and let the words and visuals speak to you inspiring your “Time to Shine”Facebook: Insta: Twitter: @evellemusicFor Bookings:management@acientertainment234.comTel: 002349081222206Facebook: Insta: Twitter: @aci234

CONTROVERSY ALERT: E-sure skipped me on a record deal opportunity because...

Rudeboy & His Kids ‘Rehearsing For A Forthcoming Concert’ See Video