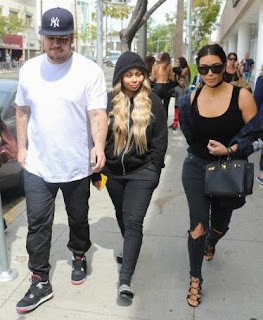 It was revealed yesterday that companies owned by the Kardashians have filed legal documents to block Rob’s fiancee, Blac Chyna, from trademarking the ‘Kardashian’ name for use. According to the documents obtained by media outlets, attorneys for the sister’ companies claim that Chyna is deliberately seeking to profit from the goodwill and popularity, and they’ll suffer damage to their reputation and goodwill if she gets to use the name. (Read here)Her lawyer Walter Mosley has now reacted. He was “shocked” to learn that the Kardashians are opposing the request and told People Magazine that of the “many trademarks” he’s filed for her, “this is the first one that’s ever been opposed.”
“The Kardashians, like Angela and my other clients are very protective of our marks, I think for us this is going to be a clear case win, because it’s actually her name, it’s not a poaching. I would hope that this is just a junior lawyer’s error, who’s just responding to everything and not really looking at who it’s from or why it was filed. There’s a softer side of this where Angela has to have a conversation with her family. But until I hear otherwise, I’m just going to proceed as I normally would with a lawsuit. I have 40 days to respond,” Mosley said.

Mosley hopes that “it’s just a big misunderstanding.” According to him,

“I have to respond to the notice of opposition, so the way this works is we filed the mark, it was initially unopposed, it was published and then the representatives of the sisters’ companies filed an opposition to Angela owning her name. Sure, it’s not her legal name now, but it is certainly her stage name — her next stage name and her legal name once the wedding is done. In the complaint they are not short or shy as to how they feel about Angela using the trademark. I’m hoping that it’s just a big misunderstanding.”

“I filed this trademark with the utmost confidence that it would not be opposed at all. I did not foresee this, but in retrospect maybe I could have, all things considered,” Mosley says, and adds, “I’m going to zealously represent my client in a trademark we legally filed and a name that we feel like we own and need to protect. Everything has been fantastic between her and the family to the best of my knowledge, so this is a shock. I’m hoping this just goes away once they see what it is. Angela, Rob and Dream are doing amazing, wonderful and things couldn’t be better.”

Fans Rejoices As lisayaro Shares Photo Of A Her And Don...