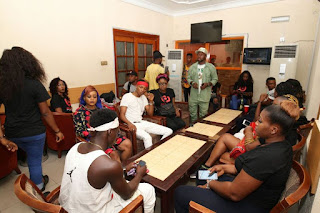 Good artiste, good music and good management alongside finance will surely produce a success bound project and that is the path DexTen Entertainment’s singer K-Shock is toeing after his single with Selebobo.The single titled ‘Finally’ has become a street anthem within a short time, thanks to the quality brought in by the ace producer cum singer Selebobo and bright future ahead of K-Shock.
As it has been from one event to the other for K-Shock, his record label, DexTen Entertainment organized a Valentine Day show for him alongside Chasis P, Jaywise and other artistes and the event went on to shut down the city of Owerri, Imo State, becoming the talk of the town amongst other events which took place that day. Speaking in Owerri, the label promoter DJ Paky, who is behind the massive promotion the song ‘Finally’ has been receiving, said everything is moving according to plan and there is still more work to push the artiste to the top.“Many people say we are successful, but I think we are just kicking off, we still have many plans to implement and after wowing the city of Owerri on Valentines Day, the next thing is for us to keep up with that standard.“There is no stopping for us because we want to make DexTen Entertainment and K-Shock household names in the industry” he concluded.K-Shock is the first artiste to be signed by DexTen Entertainment, a record label based in Africa and Asia. 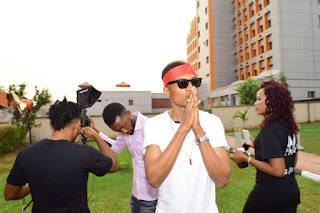 Man Kills His Blood Brother For ‘Disrespecting’ His Girlfriend In Onitsha....

Adesua Etomi “2 more days to the nationwide release of The...

2face says Wizkid is the legend of his generation, Read to...

NEWS GRAPHIC PHOTOS: One dead as two brothers fight over...